Mike Speaks: How I Became a Left Handed Guitar Player. Sabrina Speaks: Illness and Wisdom from a Mountain

Mike Speaks: How I Became a Left Handed Guitar Player. 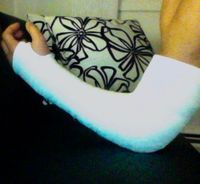 When I was 8 years old, I loved to climb trees as lots of 8 year old boys do. One day I was climbing an apple tree fairly close to home and I grabbed a branch that couldn’t hold me. The branch broke and I fell about 12 feet.  I landed on my side and on top of some rocks. My left arm took the brunt of it. I panicked and started to cry even though it didn’t really hurt that bad. I couldn’t move my hand, it just sort of hung there on my arm. I walked home which was only about 3 houses away and my Dad was working in the yard.  I called to him and he ran over to me and looked at my arm.  I remember him looking at me with a look I had never seen before.  He took me straight to the car and ran into the house to get the keys.  I’m guessing he had a quick talk with my mom and we headed to the doctor’s office.  Our doctor had an office about 8 miles away.  As we drove my arm got more and more painful. By the time we reached the doctors office, I was hurting pretty bad.  My dad parked and ran into the doctor’s office. A few minutes later the doctor came out to the car with something that looked like a shoe box and some of that elastic bandage stuff. He took my arm and set it and wrapped it with the bandage. The pain immediately subsided. He told my dad to go to the hospital and he would meet us there. I’ve never seen a doctor close down his office with people in the waiting room before. It was another 10 miles or so to the hospital.  My doctor met us there and a few seconds later I was being rushed around the hospital in a wheel chair. I remember looking at the x-rays and seeing the breaks in both the bones in my arm about 2 inches up from my wrist. I was taken to the Operating Room and they put a mask on me and told me to breathe slowly.  I was freaking out a bit and I had no idea where my dad was but I think I was out pretty quickly.  I woke up in a recovery room with a cast that went from my fingers to my armpit. 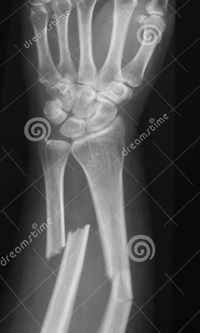 Fast forward 6 weeks and they removed the cast. Man was my arm itchy. Everything seemed fine but I couldn’t turn my arm over. What I mean by that was I couldn’t turn my left hand to the palm up position.  The doctor said it was pretty common and I would just need a little physio therapy to get things back to normal. A month later there was no change in my arm. I went back to the hospital for x-rays. It turned out that my arm had healed incorrectly.  I was told that the only thing they could do was to re-break my arm and set it again.  This involved them making 2 incisions in my arm, cutting the bones where they were broken and re-setting the break.

Back into the Operating Room.  This time I woke up with a slightly smaller cast, but I was warned not to shove anything into the cast to scratch, because there were 2 incisions on my wrist with about 7 stitches in each. After 6 more weeks, I had the cast removed and the stiches removed and went back to Physio, but the arm did not improve much. After a year of physio I could turn my hand enough to clap my hands together, but that’s it.

So in order to play the guitar, which I had already started to learn to play right handed, I had to flip the guitar over, change the strings and start again. I think there was a little nerve damage because I still have coordination problems with my left hand which is my picking hand. Some picking techniques I just can’t seem to do, so I figured out ways to emulate as best as I could.

So that’s how I became left handed. My left handed mobility problem has had very little effect on me.  About the only thing I can’t do is receive coins with my left hand, and almost everything is cards these days.  I never get handed change anymore.

Sabrina Speaks: Illness and Wisdom from a Mountain 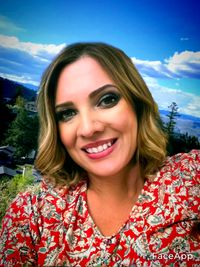 When Mike I decided to start blogging, we built a little schedule and decided what we would write about each week. We did this in the hopes of building a little diversity into the blog and to allow each of us the ability to write more than one blog post each week. The diversity plan seemed great except that most of the posts were supposed to be about the past. Frankly, I’ve never been great at telling stories about the past. I tend to forget details that are quite important to the story.  Mike is the opposite. He tends to remember in exact detail huge parts of his past.  Truthfully, my tendency is to focus on the future. I’m a planner and a dreamer. I’m always conjuring up the next great adventure.  Sadly, this trend often seems to leave me feeling dissatisfied with what is going on presently in my life. I’ve never been one to celebrate the small wins.  It’s always been all or nothing with me.

With my current illness, impending surgery and possible (probably?) cancer diagnosis, I’ve once again felt the call to do some self-work – things like releasing anger and resentment and focusing on forgiveness and self love.  In doing this, it’s my intention to switch more of my focus from the future to the present moment.

This is the gift that an illness gives.  I feel like I have been given the opportunity to become more present in my life.

In my quest to prepare my body for surgery, we’ve been walking most days.  Not far from our house is my favorite hiking trail but it starts with a VERY steep climb.  I loath this part of the walk because I am very out of shape, but I force myself to do it anyway.  As I climb, my legs and lungs burn the entire time. My eyes blur and my heart pounds out of my chest. I keep my head down. Every now and then, I take a quick glance up the hill to see how close I am to the top. Most of the way, it looks like I’ll never reach the top and it feels like the torture is never going to end. It probably takes about 10 minutes to climb this hill but it feels like FOREVER. I slowly but surely made my way upwards.

Yesterday something interesting happened. As I was climbing the steep hill, I watched my mind travel to this strange militant place. I noticed that I felt frustrated with my progress most of the way up. I noticed that it was my tendency to head-down grunt my way up the hill, forcing myself to keep going, scolding myself for my state of fitness. I didn’t really notice much of anything more than my physical discomfort and the distance I was away from reaching the top.

It occurred to me that I had never stopped midway to take a break and to just appreciate how far I’ve come.  Oddly, taking a break never occurred to me. I decided to stop. I took a few deep breaths and turned around. In my light-headed state, I admired the beautiful wildflowers and lush foliage that encased the trail. I noticed the wave of the terrain and the musky aroma of well watered evergreens. But most of all, as my heart rate returned to normal, I noticed that the climb that I despised didn’t seem so awful from the midpoint. In fact, it didn’t look steep at all. I decided to acknowledge my climb thus far as an AWESOME success and then turned to continue my hike.  After this little rest, the remaining half of the climb didn’t feel like a burden. 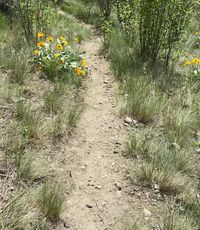 Have you seen the movie “Click” starring Adam Sandler? Its about being given a remote control where you can, among other things, fast forward through the parts in your life that you don’t like.  I think that I do this by ‘checking out’. I think that I learned to do this in university.  You know, those insane three or four hour long exams where you just write and write and think and remember and write… and your hand feels like it’s going to fall off but you just ignore the pain and just keep going?  I learned that I could head down grunt my way to success. I was readily rewarded for my behaviour with excellent grades. As a result, I applied this great new trick to other parts of my life. I’d do it with housework, exercise, and shopping. Sometimes I’d do it with relationships. I Really didn’t see it until now. This hill helped me realize that I’d been ‘checking out’ of great swaths of my life. This could be the reason that I have forgotten so many details from my past. It’s not that I’m losing my mind or that I don’t have a mind for details (or old age lol). It was actually because I wasn’t truly there. I wasn’t present. I wasn’t paying attention.

Over the years, I’ve known that I can watch movies over and over because I rarely remember them. This climb helped me realize that I forget the movies because I’m never truly watching them.  I’m usually multitasking – I’m messing around with Facebook while I am supposed to be watching the movie.  The thing with multitasking is that you’re never fully present in either capacity.

The more I thought, the less I felt like I had been truly experiencing my life, even with all the amazing adventures that I’d been on. I was there but just not fully present.

Today, I’m grateful for the mountain. I think my climb has taught me three things:

I don’t need to muscle through my life. It’s ok to stop, take a break and smell the roses.
It’s beneficial to celebrate the little wins. These celebrations are part of the journey. After the celebration, the mountain no longer feels unsurmountable.
I want to focus on being present in my life and my relationships. It’s my intention to learn to live where my feet are.

Thank you for reading.

if you read this, and have no idea what surgery, all the info is HERE.