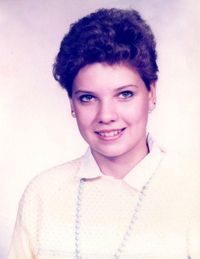 For most of my life, I was considered a fat girl.  In elementary school, I was bullied because of my weight. I remember one time a boy did a two-legged drop kick to my ass and he flew several feet away from me, like a cartoon. You could almost hear the “Bajoing” as my ass vibrated afterwards. I never lived that down.  I was also quite tall.  In fact, right up until high school, I was the tallest person in my school at 5’8.5”. Needless to say, I always felt like I didn’t fit in and definitely didn’t feel beautiful or desirable. Being a big girl had me constantly wishing that I was one of the pretty, little girls that the boys loved.

I started high school the fall of 1984.  Our school had grades 8 through 12. We didn’t have a middle school. Lillooet had two elementary schools that fed into Lillooet Secondary School – Riverview and Cayoosh.

I remember the first day being quite overwhelming. Instead of having one teacher for all your subjects, each subject had its own teacher and we would travel from room to room to take the classes. Not all the classes had the same students in them either, so there was a lot of opportunity to make new friends (which I did). I tended to make friends with other misfits. We had lockers where we kept all our things and were permitted to decorate the inside as we wanted.  And… drum roll please…  we had a LOT more freedom.  You could leave the school at recess or lunch and you didn’t have to head home when classes were done.

It was in either grade 6 or 7 when my mom had started teaching aerobics and forcing me to attend the classes. As a result, I lost a ton of weight. By grade 8, I had a rockin’ little body and it was starting to garner some attention from the older boys. I think it also helped that I developed early and had a pretty nice rack. Of course, I didn’t actually know what to do with all this attention because I still felt like that awkward unattractive kid.  I was so insecure.

I started to develop my own fashion sense.  Madonna infused my choices but I wasn’t really permitted to dress like her so I would bring my Madonna clothes and change on the bus.  I used to wear black mess shirts with a black bra underneath with footless tights, lace socks and stilettos, lots of beaded necklaces and crazy unpaired earrings. I would rat my hair and spray the heck out of it and top it off with a bow. I thought I was very tricky right up until I go caught by my mom one day when she came to the school to visit me.  More on this in another blog post. 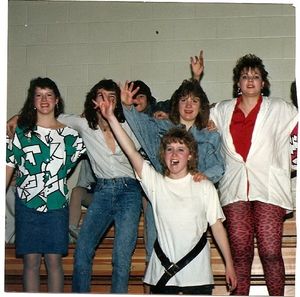 It was a few months into high school when I met my first love. His name was William. I started to hang around with the smokers and behind the school was a place we called the smoking pit.  On all the breaks, we’d all meet there to smoke and listen to bad heavy metal.

William was a beautiful young man. He had dark curly hair, big eyes and a strong jaw.  He also had a pretty smokin’ hot body and seemed very strong and athletic. But more than that, he was the life of the party. When you were near him, you were always laughing.  His eyes lit up when he laughed and he loved to poke fun. But he wasn’t the kind of guy who would be hurtful. It was always just in fun.

To get to and from school, I’d take a bus from the subdivision where we lived to the school downtown and vise versa. I can’t remember how long William and I spend just hanging out behind the school smoking or how many months it took, but one time, he walked me to my bus after school. We just walked and talked. I loved spending time with him and by this point, we had become almost friends. Right before I got on the bus, he popped the question, asking me if I’d go steady with him.  I was elated and, of course, said yes. I had the biggest crush on him. I remember how happy I felt on the ride home. I was literally floating on a cloud.  He picked me, I thought - me, the big awkward girl that the boys made fun of. He picked me, the ugly girl. It was a huge boost in my self esteem.

The next day, he was there to meet me when I got off the bus. After a short while, we decided to share a locker. I was in love. It was young love and I loved him deeply.

I’m so grateful for that first spark of experience. It was a tumultuous relationship that lasted about two years. It certainly wasn’t all good and it got pretty awful by the end (mostly my fault) but I will always remember the beginning - the sweetness, the excitement, the tenderness. It’s a wonderful memory to cherish.

I grew up in a small town in southern Ontario called Nobleton. At the time, high school started in grade 9 and went to grade 13. The high school I attended for grades 9 and 10 was located in a town about 7 miles away and serviced about 5 small towns.  Probably 4/5th of the students that attended were bused in. The school had 2 gymnasiums and 3 lunch hours. We had a real cafeteria, an entire trade wing and a pretty good band program.  In the morning, I had a choice of 2 buses.  The early bus got me to school about an hour before classes started and the regular bus that got me to school about 10 minutes before class. I almost always took the early bus. I did that for 3 reasons: 1. I never had to fight for a seat; there was always lots of seats.  2. It got me up and out of the house before anybody else was awake.  I loved that I didn’t have to talk to anybody when I got up in the morning and 3. I got to school early enough to have a game of basketball before class.  There was a group of us and we got together every morning.

I loved any sport that included a ball or a puck, but I had discovered basketball in grade 6 and really enjoyed it. In grade 9, we found out that one of the gym teachers usually got to school early and would open up one of the gyms and unlock the balls from the equipment locker so, from that point on, it was pickup basketball every morning before class. 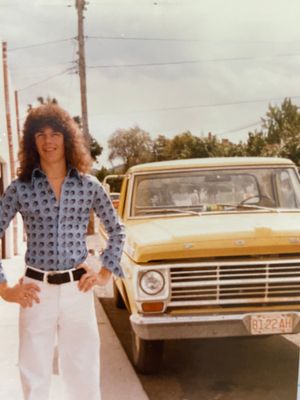 About 6 months into the school year, there was an incident one morning.  I was not there that day and I really don’t remember what happened, but the outcome was that we were no longer allowed to play basketball in the morning.  I was crushed.  What the hell was I going to do?  The thought of taking the other bus did not appeal to me at all, but sitting around in the cafeteria for an hour didn’t seem like much fun either, so me and my buddies started to figure out how we could break into the gym in the morning. We had a few small problems to work out.

Problem 1. The teacher that used to let us into the gym still got to school early and his office window looked into the gym.  We would need to find a different gym.

Problem 2. We would need to get a basketball out of the equipment room once we got into the gym.

Problem 3. We would need to blame somebody if we got caught. Nobody wanted to get into trouble.

Solution to problem 1. We watched the different gyms in the school and noticed that the other gym teachers did not get to school early, so all we needed to do was break into the other gym. All we needed was a key to the gym doors. We’ll call this problem 4.

Solution to problem 2. We usually had our gym class in the same gymnasium that we wanted to break into. At the end of the gym there was a stage. It was built into the wall with a curtain. On the stage was some parallel bars and some floor mats that were used for gymnastics. We noticed that at the beginning of our class the teacher would open the equipment room and let people play with the basketballs and volleyballs until everybody was changed, then he would call for all the balls and lock them in the equipment room, so I would get changed quick, run into the gym, grab a basketball, run down to the stage and throw the basketball behind some mats. Nobody missed the basketball and it would be there in the morning for us to use.

We got to school the next morning and found a janitor and told him that the teacher said it was ok to let us into the gym because the teacher had forgotten his key. It worked! We got into the gym, found the hidden basketball and played until it was time for homeroom.  The following day we talked the janitor into opening the gym again. On the third day we were playing basketball and the gym teacher came into the gym and asked us who opened the door for us. He looked a little pissed. We said it was unlocked so we just came in and started playing. He asked us where we got the basketball and we told him it was just sitting in the corner. So Monday morning we showed up ready to play and we asked the janitor to open the door.  He looked a little grumpy but he did it.  While we were playing, the gym teacher showed up again and asked us how we got in. This time we said that the janitor had let us in (solution to problem 3).  The gym teacher didn’t ask about the basketball, but he was noticeably upset.

Tuesday morning we asked the janitor to open the door and we were told that a memo went around and they were not allowed to give us access to the gym for any reason. As we walked around the school, a little low from the news, we noticed that the stage had a back door. It was a metal door and the door knob was removed.  We walked over and looked at the hole were the door knob was supposed to be. The latch was still intact but there was a square hole exposed where the shaft of the door knob fits through. It turned out that if you shoved a Bic pen into the hole and turned really hard you could unlatch the door (solution to problem 4). It was almost time for class so we thought we would try breaking into the stage and out into the gym tomorrow.

The following morning we showed up at the stage door and one of my friends had prefabricated a door knob in shop class. It worked perfectly.  We got into the stage, grabbed the basketball and jumped out onto the gym floor.  When the Gym teacher arrived, we told him that one of the janitors had let us in.  The gym teacher was just pissed.

This continued for a couple more days, each time the gym teacher would be more and more angry. Things were going well. Then one morning, as we all gathered at the stage door, my buddy opened the door with his handy dandy gym doorknob he had made, and standing on the other side of the door was the gym teacher.

I still remember my first detention!