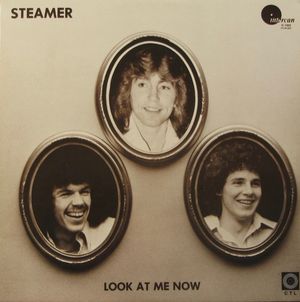 Steamer was the name of our band. We got the name from a character in the 1975 movie “Walking Tall Part 2”.  The character’s name was “Steamer Riley”. Steamer started in Kamloops, BC and became popular quickly. My next-door neighbor at the time used to put on dances and wanted to become a promoter so he got together with a couple of other guys he knew and bought a tour scheduled to travel across Canada. The tour was for a band called Steppenwolf.  My neighbor didn’t buy the entire tour but instead only purchased it starting from Saskatoon, SK and ending in Victoria, BC with the intention of promoting 8 dates across Western Canada. The tour needed an opening act and, because we lived next door and were getting good, we got the gig.  This was our first tour. By the way, we were all under 19 years old and were extremely excited about it.

To get to the first date in Saskatoon, we needed to drive for about 14 hours. We decided to do it over 2 days so we didn’t get too tired for the first night in Saskatoon. We arrived in Saskatoon the morning of the show. The promoter put us up in the Bessborough Hotel.  This is a beautiful old hotel overlooking the Saskatchewan River.  We checked in and I made my way to my room, threw my luggage down and laid on the bed, still a little fuzzy from the trip.  I could hear a funny sound coming from the hallway. It was like a smacking sound about every 5 seconds.  I opened my door and I saw 2 long haired guys with baseball gloves playing catch in the hallway.  I later found out it was the bass player from Steppenwolf, Nick St. Nicholas, and one of the road crew.

I had heard about “Rock Star” antics on the road but this was my first encounter. I decided to shut the door and say nothing. I fell asleep for a couple of hours and was woken by the phone. It was one of the promoters, and they wanted to know if I could go across the hall and knock on Mr. St. Nicholas’s door because he wasn’t answering his phone.  I did but nobody answered. It seemed that Nick was nowhere to be found and he was needed at sound check.

Steamer’s soundcheck was scheduled to happen after the headliner was done so we all left the hotel together – all except Mr. Bassman.  As we traveled through the city on our way to the arena, the promoter turned on the radio to see if he could hear one of their paid promotional ads.  As we listened the DJ came on and said he was going to do a live interview with the bass player for Steppenwolf, Nick St. Nicholas.  The promoter looked at us and said “WTF!”  Well, now we knew where Nick was.  LOL!

We were dropped off at the arena and the promoter went to the radio station to get Nick.  The sound check for Steppenwolf seemed to take forever. Yes, they did the sound check without a bass player.

I don’t remember getting much, if any, of a sound check because by the time Steppenwolf was done, it was time to open the doors.  We did our set, and I think everybody was pretty scared, but we got through it. As we were getting changed, I could see the guys from Steppenwolf getting ready to go on, but nobody could find Nick.  It turns out that by the time the promoter got to the radio station, the interview was over and Nick was gone. I was standing back stage in the dark watching the panic increase because of the missing bass player problem when I heard a pounding on the back door of the arena. I ignored it at first but it happened again and again.  I went to the door and opened it, and there was Nick St. Nicolas, the missing bass player.

The venue was dark and there was an equipment ramp that ran down from the stage.  These ramps were about 4’ across and 12’ long and the stage was about 5’ off the floor. Nick walked up to the ramp and, as he approached, he was met by a roadie who hung his bass guitar on him. All Nick had to do was walk up the ramp and everything would have been fine. Sadly. it seemed that Nick may have been indulging in some pharmaceuticals and the ramp was scaring the shit out of him. I watched as Nick spun the bass over his shoulders, got down on his hands and knees, and started to crawl up the ramp. Nick crawled while 2 roadies spotted him from beside the ramp. The entire time he inched towards the stage, he was calling out “don’t let me fall” over and over. I Couldn’t help but laugh.  It was the funniest thing that I’d ever seen in my life.  He eventually made it to the stage.  They did their set and we got back to the hotel at about midnight.

I went to my room and heard more strange noises from the hallway.  I opened the door and there was Nick and a roadie wheeling Nick’s amplifier into his room. A short time late, you could hear Nick playing his bass, booming away, in his room.  About 10 minutes later, you could hear hotel staff banging on Nicks door trying to get him to stop.

The next morning when I went to leave, I saw that Nick’s door was covered top to bottom with Steppenwolf stickers. Just then my phone rang and I was informed that the bands that performed last night were not welcome in the hotel and I had to leave immediately.

The rest of the tour was just a continuation of that first day. Sadly, it was cut short due to bad ticket sales and lack of funding.

I will never forget my first “tour” experience as long as I live. That’s Rock and Roll!

Sabrina Speaks: Memories from a Gig

Here’s some creative writing from a while ago.

The high-hat sparkling, triplets bounce beneath Raoul’s tattered wooden drum sticks. Pausing, he signals the looming resolve of Leon’s 16-bar solo.  The bass pulses on and off the beat, flirting with the melody, and growling as if to taunt me for my lack of preparation.  My breath shortens, and I tap my feet in syncopated anticipation. It’s my turn to solo next, but I fear that I have nothing to say, or at least nothing memorable to say, which is worse than saying nothing at all.

“Well, you know!”  says Leon, a slight man with thinning brown hair and sunken eyes as he slides his fingers down the neck of his bass guitar, teasing the crowd of fifteen people, “there comes a time in every show when you have to introduce the star… the ‘big’ top.”  He backs away from the microphone.  With a vague smile, he turns to face me. It was almost as if he felt my terror and was reveling in the vibration of my insecurity.

“Why…” I answer, batting my eye lashes, “whatever do you mean?”   A nervous cocktail of panic and elation churn beneath my black leather vest.  A rush of embarrassment reddens my face.  An empty ache constricts my throat.  Do they know that I have nothing to say?  Breathing deeply, I force a smile. Backing away from the microphone, I drop my head. My sweat soaked hair falls forward, sticking to my cheeks as I circle my hips and thighs to the drone of the bass guitar.

“All the way from outer-space, people,” Leon continues, yet his voice seems to trail off.  The music marches forward and I am swallowed up by the waves of droning, pulsing, taunting agony.  Contradictions churn wildly within me like an angry river, ripping furiously through this hell of indecision.  “To SASS-ify your situation…”  Leon’s voice gurgles, “I’d like to introduce…”

Panic erupts.  “No, I’m not ready, ” I cry out with a powerful silence, “I am drowning.”  I back further away from the microphone. The bubbles of blackness steal the breath from my chest.

Again, Leon steps away from the microphone.  Stroking his tan wood finished bass guitar, he lunges forward.  In a loud elongated phrase, he yells, “I’d like you’all to meet… Sabrina Weeks!

In the absence of melody, a silence reigns as I slowly, yet hesitantly, wander towards the microphone. The music pulses with a rhythmic semitone transgression. Who is Sabrina Weeks?  Who has Leon introduced?  According to legend, Sabrina was the illegitimate daughter of a Welch king who was sentenced to drown in the River Severn. Oddly, a psychic once told me that I had asthma because I had drowned in a past life.  Am I reliving my watery death?   Are the high hat and bass guitar rhythms merely the babble of bubbles rising as I sink slowly to the bottom of the river?  Breathlessly, I raise my head to the flashing blue, red and yellow lights.  Smoke emanates from the machine at my feet.  The music seems to loop endlessly, waiting for my voice.  With shaking hands, I grasp my microphone.  An old friend, my microphone, is one of my most cherished gifts. It symbolizes Sabrina the vocalist.  I breath in its strength, feeling the cool screen on my lips.

Smiling, I turn my head to look at Leon once more.  Now concern emanates from his eyes as his fingertips caress and dance around a staccato bass melody.  Pulling my lips towards the coolness of my microphone once more, the bubbles burst, and sound resonates through the hall.  I close my eyes and my voice starts with a slow, sultry release.  From within my own body, it feels somehow as if I was calling for a rope, a means to pull myself from the raging emptiness,  summoning the spirits of survival, summoning inspiration from the gods of music. Joining in my howl for help, the energy accelerates as the drums switch from the high hat to the ride.  Deep crashing bell-like clanging smoothly penetrates through the froth. The bass pulse quickens.

Suddenly, the haunting melody of a guitar is wailing, mingling with the rich, mournful overtones of my vocal reckoning.  I feel Sabrina emerge as I break though the watery crest.  In an instant, for a moment, I am wholly and completely myself, Sabrina the vocalist.  With new vigor, my solo evolves into a quick staccato scat.  Scooping down from a passionate crescendo, my head shakes and sweat flies from my hair. The music rises; the beat hastens.  I rip the microphone from the stand and spiral this way and that, like the waters of a river-rapid dancing amongst the rocks, dizzying myself, exposing then concealing in continuous motion.  My solo escapes the river as it becomes the spray, separate from me, weaving around and concealing my insecurities.  Sabrina Weeks has been introduced, free and limitless.  I bask in this feeling of wholeness, only to waken abruptly as Raoul signals the end of my 16 bar solo.

I open my eyes, half expecting to see a crowd of awestruck fans marveling at my feet, but the dance floor is empty. There is no raging applause.  There is no recognition of the emergence of greatness.  There is nothing but the continuation of the song. Perhaps I did drown.  Perhaps my introduction, my emergence, my transformation was merely the desperate prayer of woman consumed by water, drowning in the waves of unfulfilled dreams, choking, suffocating beneath the weight of impossible expectations. Who is Sabrina Weeks?  How can I ever know this person when the chances for her emergence are often obscured beneath a river of indecision and rife with the need for the acceptance of others.