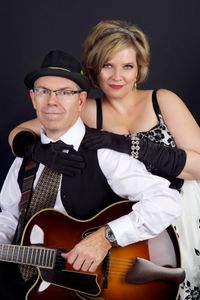 Join us at Match for an evening of fun and song.

What People Are Saying

"Sabrina has more energy than that bunny in the battery commercials.  She also has class, style, sass and smarts.  When she sings, the whole damn room lights up. I could be in love..."

"Sabrina Weeks must not be missed.  One of Canada's sweethearts, switching from sweet to risque in a heartbeat and on to who knows where.  She always delights and surprises."

"The Maple Blues Award for Best New Artist or Group is intended to be a springboard to greater things. It would seem that their 2011 Award certainly accomplished its goal."

"So it’s a party record hosted by vocalist Weeks and Mike Hilliard.  The party ain’t sloppy, though. The sound is crisp and the songs are punchy. The award-winning duo display the benefits of touring and heavy gigging – they’re confident and assured."

"Sabrina Weeks and  Swing Cat Bounce have “got their eye on you” to make sure your toes are tapping...   They step right out of the soul side of the ’70s mixed with a touch of ’50s pop in the background vocals and even a touch of modern country/ western swing."

“Vocalist/front person, Weeks is a formidable vocal presence whose style is rooted in a past era that was dominated by jazzy big band sounds. She brings a certain verve associated with the days of ballrooms and sequins...”

“Sabrina weeks and Mike Hilliard are a sizzling, scintillating, swinging, soulful duo  who delivers a first-class show wherever they appear- original and fresh with a new twist to the blues and a dance beat that just won't quit. Their show is a guaranteed crowd pleaser and this gal can REALLY sing!”

“Chock full of chops, Sabrina Weeks & Mike Hilliard is a hot blues duo with a jazzy, swingy feel that is irresistible. With an excellent debut CD, "Tales from Lenny's Diner," this is the best new live act I've heard in ages.”

Brant Zwicker, At the Crossroads

“Sabrina can caress a ballad, shout a mean blues, and swing with the best of them. Sabrina's gift in using her exceptional voice includes the ability to make lyrics come alive. Hearing her is a beautiful experience.”

"Sabrina Weeks brings the goods with a powerful voice and spirited sound. She's a talented artist that doesn’t take herself TOO seriously, which shines through with her sassy, yet strong song lyrics that are guaranteed to put a smile on your face.”

“It’s music that’s full of life, vitality and fun. While the “bouncers” are excellent musicians, it’s Weeks who dominates with a voice that sounds like it was trained back in the 1940s and 1950 s. She just gets that boogie down right.”

“Sabrina Weeks & Mie Hilliard is a little city duo with a big city sound and I do mean BIG. These cats can stand up against any Swing-ing Boogie Blues duo out there today and not only hold their own, but blow the competition away.”

“I enjoyed Sabrina and Mike.  Great songs, great sound, Sabrina has a perfect voice for it. An energized performance:  Good vibe, good rhythms, and . . . what a terrific lead guitar.  Could've been Colin James up there...”

Grant Russell, Music by the River